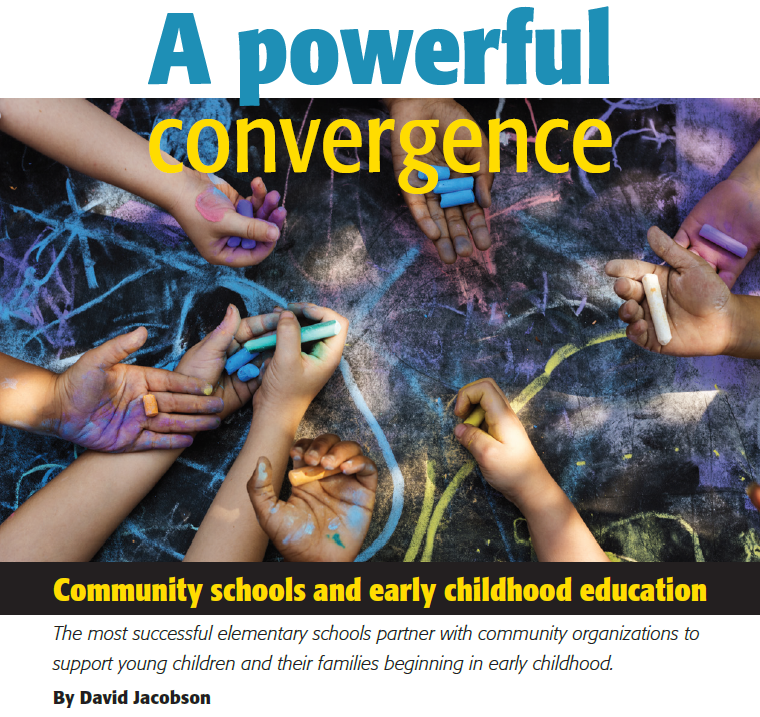 Just out in Kappan magazine:

“In many cities and towns across the United States, elementary schools are forging deeper partnerships with families and community organizations well before children arrive at kindergarten. The aim of this work is to improve children’s experiences and family engagement and support along the entire continuum from prenatal care through grade 3 and beyond.

This potent combination of educational supports and family services is the single best strategy we have to address pernicious opportunity gaps and raise achievement for low-income children. Communities such as Cincinnati, Ohio; Omaha, Neb., and Multnomah County, Ore., are embracing this approach to tackle persistent poverty, family instability, the hollowing out of the middle class, and the demand for a more highly skilled workforce.”

You can find the full article here.

This past summer I did a presentation at the National Academies of Medicine on how P-3 Partnerships can serve as ideal platforms for preventing and addressing Adverse Childhood Experiences (ACEs). This two-day workshop on the Neurocognitive and Psychosocial Impacts of Violence included presentations by researchers from the health, behavioral science, criminal justice, and education fields. You can find the workshop agenda and a number of the presentations at the meeting webpage.  The National Academies has also made audio of all the presentations available at the bottom of the page (the audio requires a large download of each day’s sessions).

For easy reference, you can find my slides here, and I’m posting the audio from my session below (I pick up the pace as I get rolling a few minutes in). You will see a small square of video in the top right corner. Unfortunately there is no way to make the video larger.

In case you had trouble accessing my recent commentary in Education Week, Preschool Matters Today has now re-published it: A Purple Agenda for (Early) Education.

I have strengthened the language around family engagement and support in the principles for effective P-3 partnerships and the associated theory of action graphic. You will see that I drew on a consolidated version of the renowned Head Start family and community engagement outcomes, which I think are right on-point and fit well within the context of the P-3 theory of action. Check out the Overview and/or the Full Explanation (a 12-minute read). Many thanks to my EDC colleague, Heidi Rosenberg, for her helpful suggestions.

Also see Melissa Dahlin’s article at New America’s EdCentral: All in the Family: Supporting Students through Family Engagement in ESSA.

Late last week I posted a new version of a theory of action and 7 principles for P-3 Community Partnerships. The aim of the piece is to help clarify the important role P-3 partnerships can play in improving outcomes for young children. Based on what we have learned about early learning partnerships around the country, I draw attention to a set of core strategies partnerships can employ in building the capacity of elementary schools, community-based preschools, and other P-3 organizations.

I want to mention that the Theory of Action page has been revised as well. This page provides an overview of the somewhat more detailed explanation in the post. The theme I use for the P-3 Learning Hub uses a relatively narrow column width for posts, which is intended to make reading easier. It may also make posts seem longer than they are, especially when compared to the wide columns in a report. With this in mind and following the lead of the blogging platform Medium, I’m going to start noting the expected reading time for more substantive posts. Medium calculates that the new post on Version 2.0 of the P-3 Theory of Action is a 12 minute read.

Finally, I included a footnote thanking a number of reviewers for their very thoughtful and enormously helpful feedback on the first version of the theory of action. I’d like to thank them here as well:

This post updates a theory of action and 7 associated principles that I first posted last year. I’ve revised a few of the principles, and the principles line up with the graphics much more clearly now. I also draw attention to three distinctive features of the theory of action. According to the blogging platform Medium, this post is a 12-minute read. See this page for an overview of the core ideas. Many thanks to friends and colleagues for all the helpful feedback. ¹

Over the last 10 years, research, policy, and expert opinion have converged on the idea that addressing achievement gaps requires a comprehensive focus on the first 8-9 years of life, beginning with prenatal care and continuing with high-quality supports through third grade (P-3). The goal of this work is to improve the teaching and learning of cognitive and academic skills while deepening supports for physical and mental health, social-emotional learning, and family partnerships.

Community partnerships of elementary schools, community-based preschools, and other organizations serving young children and their families have great potential for achieving this goal and addressing achievement gaps. When these organizations take concerted action around a common set of goals and strategies, they are among the most effective and powerful ways of improving educational outcomes for lower income children.

Quality Within, Continuity Across

In order for early childhood education and early elementary school to be most effective, communities need to address two obstacles. The quality of both early childhood and early elementary education is highly inconsistent, and the mixed delivery system is characterized by a high degree of fragmentation. Addressing these twin obstacles–inconsistent quality within organizations and fragmentation across organizations–requires a collective response on the part of communities, efforts that require state and federal support as well.

Communities need to raise the quality of education and care in the various community-based organizations and public elementary schools that serve young children and their families in their locale; they also need to create meaningful linkages that align and coordinate the work of these organizations. Developing this capacity requires partnerships of schools, community organizations and families focused on quality and continuity–what I call P-3 Community Partnerships.

END_OF_DOCUMENT_TOKEN_TO_BE_REPLACED

I’m pleased to announce that EDC has received a grant from the California-based Heising-Simons Foundation. The grant is funding a study of place-based approaches to improving early learning outcomes for young children. I will work with my colleague, Kyle DeMeo Cook, to investigate three types of community partnerships for early education:

Cradle-to-career, wrap-around, and P-3 partnerships are all part of a new wave of educational collaboration for education. They each have a place-based dimension in that they attempt to concentrate their impact within defined geographic areas, and the early years figure prominently in all three. Yet they have developed as three distinct reforms, each with its own principles, priorities, and learned experience. Typically these partnerships have been implemented separately from each other. The new study will investigate how leading edge communities across the country are drawing from the three partnership models as they design integrated approaches to best serve young children and their families. The aim of the study is to inform—through recommendations, guidance documents and presentations—the work of communities interested in implementing effective community partnerships for early education.

This research study is part of a broader project to develop the P-3 Theory of Action, the associated 7 principles, and related practical implementation guidance. See in particular Principle 4 on integrating vertical and horizontal alignment strategies and Principle 5 on strengthening neighborhoods and communities by linking P-3 with cradle-to-career initiatives.

Liberals and conservatives often disagree about the causes of poverty and other social ills. Broadly speaking, liberals point the finger at structural factors and advocate for policy changes, while conservatives look to individuals and families and favor behavior changes. Clearly, both points of view have validity. But what’s often overlooked is what lies between these two poles — communities and neighborhoods — and the value of focusing on this middle zone. (David Bornstein, How Community Networks Stem Childhood Traumas)

In the early 1990s, Washington State created a state-wide Family Policy Council to address a spike in youth violence. The Council in turn funded local community networks to develop integrated approaches to violence prevention. David Bornstein, a reporter for the New York Times, describes the thinking behind the approach in ways that will sound very familiar to those working on P-3 initiatives:

The separation made little sense. Youths who commit violence or drug-related crimes at 17, or drop out of school at 15, often have received a first suspension in second grade and have experienced abuse or neglect as toddlers or infants. It is now understood that the best hope of interrupting this downward spiral requires years-long collaboration between child welfare specialists, parents, educators, health workers, police officers, legal advocates and community members. [Italics added.] (Tapping a Neighborhood’s Inner Strength)

Over time the Family Policy Council began sharing research with the community networks regarding the impact of adverse childhood experiences (ACEs) on young children. ACEs refer to 10 types of abuse, neglect, and family exposure to toxic stress. One in four adults report having three or more ACEs, which are closely linked to a range of problematic outcomes for adults, including drug use, physical and mental health challenges, and early onset of disease.

Washington’s community networks followed the lead of the Family Policy Council and focused their work on addressing ACEs. They launched community outreach campaigns, organized neighborhood associations to address the underlying causes of ACEs, and developed programs in schools and social service agencies. Communities chose to work on a variety of issues, including prenatal smoking and drinking, truancy, youth drinking, domestic violence, foster care, mentoring, and improving playgrounds and parks.

In recent years several evaluations have found that community networks have been highly effective in reducing ACEs, capped off by a recently-published Mathematica study that found that several communities had successfully reduced the “long-term social, emotional, and physical problems related to abuse, neglect and other adverse childhood experiences.”

END_OF_DOCUMENT_TOKEN_TO_BE_REPLACED

This post is a cross-posting from Preschool Matters Today, the blog of the National Institute for Early Education Research (NIEER). Thanks to Michelle Ruess at NIEER for her support.

A  Community Innovation Zone in Harrisburg, PA recognized that a paucity of pre-kindergarten opportunities resulted in too many children entering kindergarten with no preschool experience. It responded by providing a summer bridge program offering not only activities and starter libraries for children, but also workshops for parents.

My recently published report, Building State P-3 Systems: Learning from Leading States, examines the P-3 work underway in Oregon, Pennsylvania, and Massachusetts, states that are part of a broader movement focused on improving quality and continuity across the P-3 continuum. Three overarching lessons for future state P-3 initiatives stand out.

END_OF_DOCUMENT_TOKEN_TO_BE_REPLACED

I have now posted Version 2.0 of the Theory of Action and 7 principles. Please see this post for the updated version.