Learn about how state agencies, regional support organizations, and communities collaborate to improve outcomes for children and families. Lee Anne Larsen of the Maine Department of Education joins me in this NAEYC Virtual Institute video recording. 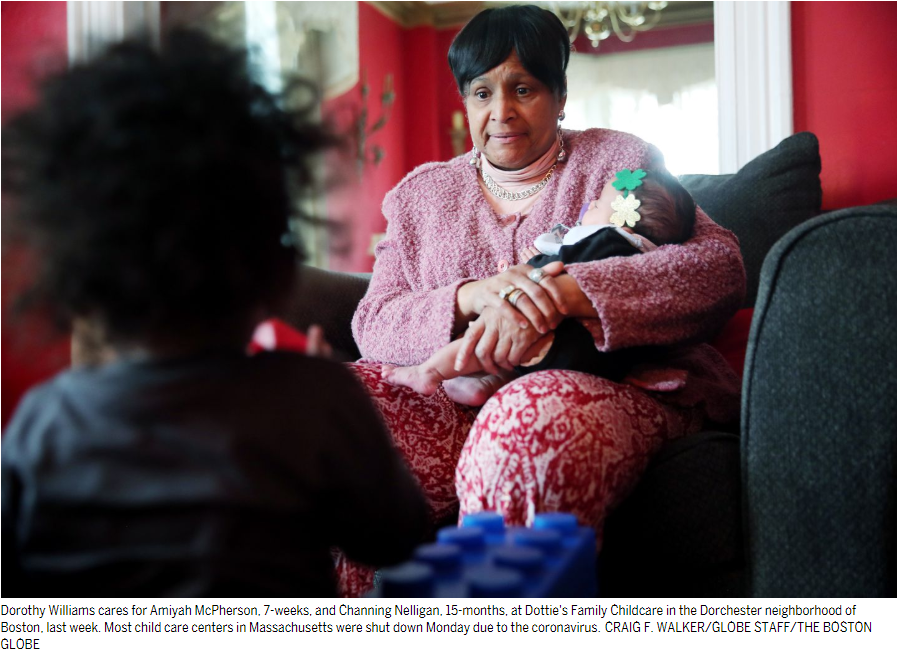 “One thing is clear: We can no longer afford to approach child care as an economic accessory. We must approach it as the oxygen on which every facet of our recovery will depend.”

“Free public school starting at age four, or even three, is growing in many American cities. It’s gaining traction as a way to help young children learn the reading, counting and social skills that prepare them for kindergarten. It also promises to help close academic gaps between rich and poor children. Above all, it may have lasting benefits for attendees, including success in school and better lives as adults.

But promises are not guarantees, and universal pre-K works better in some places than in others. Washington, D.C., runs one of the country’s oldest, best-funded, most comprehensive pre-K systems. So what can other cities learn from Washington’s success?”

“It’s devastating to think that as early as infancy, a child might be deemed to be “at-risk” — that is, at risk of failing in school, of being trapped in poverty, of even facing a diminished life expectancy.

‘The achievement gap exists in kindergarten,’ Andrea Heberlein, a United Way of Lancaster County staffer and P-3 advocate who oversees an education task force for the Coalition to Combat Poverty, told Hawkes.

And that achievement gap opens up very early in a child’s life.

As a National Association of Elementary School Principals publication noted in 2013, ‘Data from a nationally representative sample of children, the Early Childhood Longitudinal Study — Birth Cohort 2001, reveal that gaps in what children know and are able to do appear as early as 9 months of age. Not surprisingly, these gaps only grow over time.’

And sadly, those gaps — if not addressed — can doom a child’s lifelong opportunities before he learns to tie his shoes.

It is a monumental challenge, but it is critical to free children from the life sentence that the ‘at-risk’ designation can be. So we laud those who are working to launch prenatal-to-third-grade, or P-3, programs in Lancaster County.

We’ve repeatedly advocated for quality prekindergarten education, which also is championed by everyone from district attorneys to academics to military leaders because it benefits all of us when children are prepared for school and lifelong learning. It benefits employers (who need skilled workers), the armed forces (which need educated recruits) and taxpayers (prekindergarten education is far cheaper than building prisons).

Now, we are excited by the prospects for P-3 education in Lancaster County. We hope state lawmakers and county officials are excited, too, by this promising new front in the quest to stem intergenerational poverty.”

You can find the article here.

“Yet as is so often the case, the reality is much different from what the political rhetoric says. The United States has the weakest safety net among the Western industrialized nations, devoting far fewer resources as a percentage of gross domestic product to welfare programs than do other wealthy countries.

Partly as a result, a majority of Americans will experience poverty during their lives, and America’s rate of poverty consistently ranks at or near the top in international comparisons. Rather than slashing anti-poverty programs, the fiscally prudent question to ask is: How much does this high rate of poverty cost our nation in dollars and cents?”

Marc Tucker on David Driscoll’s new book about the Massachusetts experience and on 9 Building Blocks of World Class Education Systems. Fully agree that David Driscoll “is such a decent, caring human being, overflowing with that most uncommon quality: common sense as well as a vast horde of carefully considered experience.”

See the 9 Building Blocks, including numbers 1 and 2.

Another example of the potential for bi-partisan support of early childhood programs (in line with A Purple Agenda for (Early) Education).

“Proving that leaving Congress sometimes makes it easier to find bipartisan accord, former Democratic Rep. George Miller, of California, and former Republican Sen. Rick Santorum, of Pennsylvania, have come together to back a dozen child-related policies they say can be supported on both sides of the aisle.

“The US is one of the only developed countries in the world without a child allowance — a government program giving every family a set amount of money per child, no strings attached.

A new proposal by Democratic Sens. Michael Bennet (CO) and Sherrod Brown (OH) would change that. The American Family Act of 2017 would dramatically expand the child tax credit, which currently offers up to $1,000 a year for families with significant earnings but little or nothing for many poor people, to pay:

The benefits would be distributed monthly, in advance, so that families can pace out their spending and smooth their incomes. Because the CTC, like the earned income tax credit, is currently paid out through tax refunds, it sometimes leads to a perverse situation in which families use it to pay down debt they never would’ve had to incur if they’d gotten the money earlier.”